Edited to correct a misstatement about the Golden Lance.

Unto Their Caidan Majesties Conrad and A'isha, Their Caidan Highnesses Agrippa and Bridget, Mistress Cecilia Medici, the Thrown Weapons Awards Committee, and the thrown weapons community entire, does Cormac Mor, Crescent Principal Herald of Caid and Thrown Weapons Champion of Altavia, al-Sahid and Gallavally, send greetings!
I write to you this day regarding the proposed addition of new awards to recognize thrown weapons as a distinct combat form within the Caidan awards structure. It is my goal to convince you not to pursue adding additional martial awards to Caid's collection, and instead focus on expanding the existing awards structure to be more inclusive.
Currently, there are twelve Orders in Caid that carry an Award or Grant of Arms. These are arranged in six "tracks." They are:

As you can see, two thirds of the tracks and armigerous awards in Caid are devoted exclusively to some form of martial art (armored, rapier, archery, equestrian) while the final third is split between A&S and Service.The Harp Argent and Lux Caidis are used to recognize every single art and science form in the kingdom, including the study of the arts martial. The Dolphin and Crescent are used to recognize every form of service in the kingdom, including field and range Marshals. Given this, martial activity in Caid is covered by 100% of the armigerous kingdom Orders.
In the past year, requests from the Thrown Weapons and Unarmored Combat communities have come to my notice, requesting another track of awards each. This would bring martial arts representation in the Caidan award structure up to 3/4 of the total armigerous award count, and continue the precedent of adding more awards every time a new martial form is introduced.
You might expect that with all of these martial Orders in existence, the Crown would recognize more martial arts than any other art. However, the reality shows exactly the opposite. The following graphs show the number of Order memberships given by year through the end of 2013. They are grouped by rank (AoA-level Orders are in the first graph, GoA-level Orders are in the second graph). 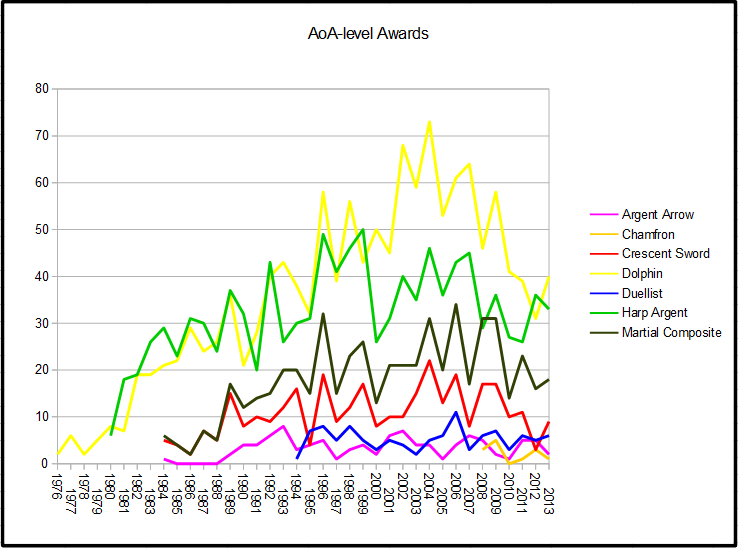 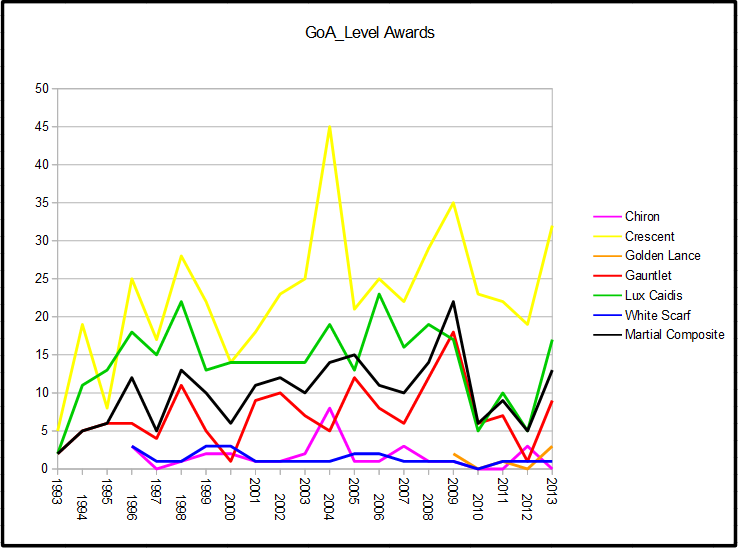 As you can see, in both the AoA-level and GoA-level awards groups, the service awards bestowed far outstrip all of the other awards. A&S awards are a close second, followed by armored combat as a distant third. Far below even them are the rapier, archery, and equestrian awards. The black line, a composite of martial awards given by year, is usually lower than A&S, and doesn't even approach the service awards given.
When the equestrian awards were created in 2009, it was felt that the equestrian community needed recognition by the Crown, and the existing awards structure had no place for them. Yet to date, only 13 Chamfrons have been given. Only six Golden Lancers have been recognized, and three of them only last year.
Why is this? Why wouldn't a brand new award that was needed to recognize an underserved community not have a huge spike in awards during the initial creation, or a surge of bestowals through the first few years? My theory is that the awards are too specialized, and that the populace does not generally write awards for that which they do not feel qualified to speak.about. The Chamfron is an equestrian award, and only equestrians know about it and recommend others. The same can't be said for service or A&S tracks.
I have a different solution. Instead of creating new award tracks for martial forms, continuing with the existing precedent and further splintering the martial arts community, we fix the existing awards structure to encompass existing martial forms and any that may come along at a later date.
Ideally, all martial forms would be wrapped up in one award track, like A&S. However, with the fate of the rapier peerage up in the air, that isn't politically feasible just yet. However, we can take the first steps toward total unification by expanding the armored combat track to admit *all* combat forms, including unarmored combat, and expanding the archery track to include *all* target arts forms, including thrown weapons. The rapier and equestrian tracks would be left as-is during this interim step.
Unarmored combat and thrown weapons would get instant recognition without having to go through the paperwork of submitting a new award through the College of Heralds (at best, a process of 6-8 months after a decision is made surrounding the design) and ordering new medallions (at a cost to the Kingdom of ~$2,000 per award, and an even longer wait).
Cousins, the graphs above demonstrate that separate is not equal. Let us instead embrace inclusivity, and mend our broken martial awards system.
Cormac Mor
Crescent Principal Herald, Caid
Thrown Weapons Champion, Altavia
Thrown Weapons Champion, Al-Sahid / Gallavally
Final Skillet-Tossing Champion, Heatherwyne
Subscribe